The “bird of inspiration” Behind iNsingizi’s Name

“iNsingizi, the foolish looking ground hornbill, amused the tribespeople with its apparent pomposity. There seemed no doubt that the female had good reason for her cry. ‘Ngiyemuka, ngiyemuka nqiya kwabethu’ (‘I am going away, going away to my people’). To this the male replied gruffly: ‘Hamba, hamba. Kad’usho.’ (‘Go, go. You have been saying so for a long time’).”
– From traditional Zulu folklore

iNsingizi Lodge & Spa owes its name to an old ground hornbill nesting site on the property that sadly no longer exists. Although it’s not known where the birds moved on to, a group of three ground hornbills still visit the property, albeit infrequently.

A bird that’s traditionally seen as a harbinger of rain, the southern ground-hornbill, known as ‘iNsingizi’ in isiZulu, occurs from Kenya and the DRC to southern Africa, where it’s found in Botswana, Zimbabwe, Mozambique, KwaZulu-Natal, Eastern Cape, Limpopo province and northern Namibia.

Generally revered in African culture, it’s often seen to be a protection against evil spirits, lightning, and drought. Its seasonal nature means that cultures in South Africa, Malawi, and Tanzania often use it as a timekeeper to indicate the start and end of a work day, or, when it moves to a new area, to foreshadow the start of the rainy season.

Description of the iNsingizi Ground Hornbill 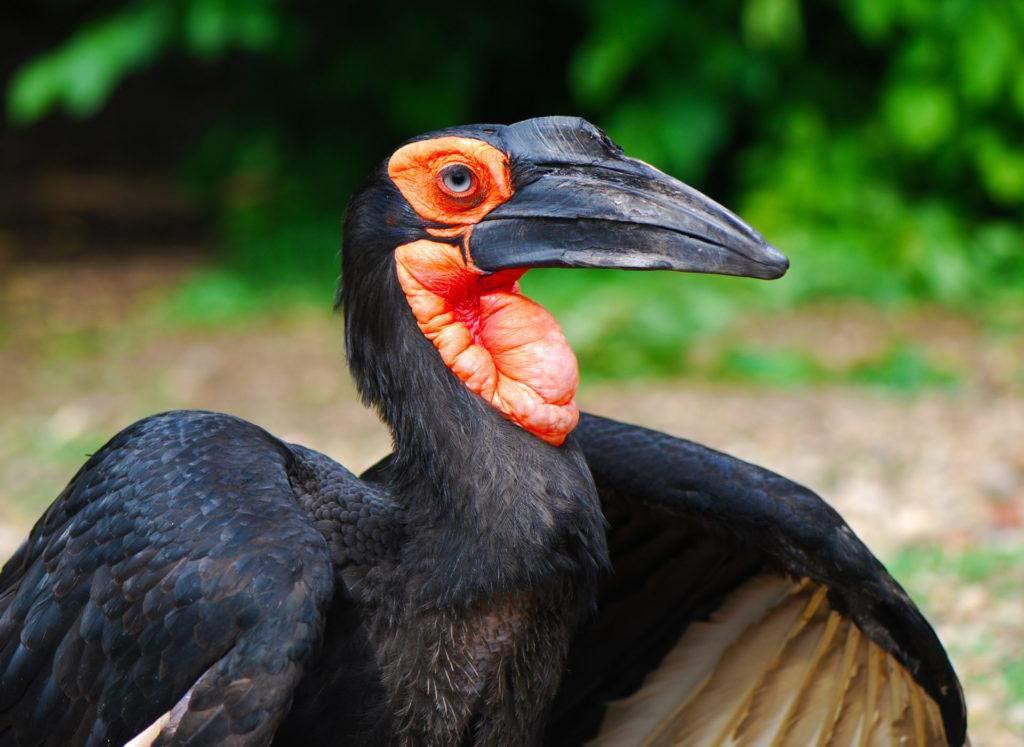 A striking bird that’s irresistible to birdwatchers and nature-lovers alike, the southern ground hornbill has a glossy black plumage and deep-red skin on its face and neck, which creates an intense colour contrast.

Females are distinguished from their male counterparts by the violet-coloured patch on their throats, while males have a very distinctive red face and throat pouch. On top of its distinctive curved bill is a small helmet, known as a casque. Interestingly, the primary feathers under its wings are white, showing that it does fly on the odd occasion.

Known in isiZulu as iNgududu or iNsingizi after its loud, booming territorial call, the southern ground hornbill is very vocal: contact is made by calls in chorus which can usually be heard up to three kilometres away. The calls allow each group to maintain its territories, which must be as large as 100km² even in the best habitat.

Known to attack its reflection in windows and shiny car hubcaps using its large sharp beak, southern ground hornbills very rarely drink and prefer foraging for food on the ground (hence its name), rather than flying or perching in boughs.

With their range limited at its western end by the lack of trees in which to build nests, southern ground hornbills prefer grassland and savanna woodland habitats.

The group roosts in trees on rock faces, descending to the ground just before dawn and foraging for much of the day. They often take a break at midday to play, preen and pass around food to one another.

The nest is usually a cavity in a tree lined with dry leaves, rarely nesting in cavities in rock faces or earthen banks. The same site is used repeatedly over many breeding seasons.

A carnivorous feeder, the southern ground hornbill will eat any animal it can overpower. Though it can fly, it forages on the ground in grassland, where it feeds on mammals (mongooses, squirrels, and hares); reptiles (snakes, lizards, chameleons, tortoises, turtles); amphibians (frogs and toads); and insects (crickets, dung beetles, grasshoppers, snails and termites).

It forages in groups, so that when one bird locates prey, it can signal this to the rest of the flock with a low bark. It often finds prey by digging, especially in dung heaps, and may snatch food from birds of prey.

A monogamous, cooperative breeder, a breeding pair will have up to nine helpers, who are usually either adult males, or juveniles from previous breeding seasons.

Egg-laying season begins with the first heavy summer rains, from August-January, peaking from October-November. It lays 1-2 eggs, which are incubated solely by the female for 37-43 days and hatch in the sequence laid. The younger chick is unable to compete for food with its older sibling, and dies of starvation when it’s about a week old, occasionally surviving up to four weeks.

In South Africa, it’s listed as vulnerable, with an estimated population of just 1 500 – 2 000 of these birds left (mainly in the Kruger National Park) but fewer than 400 breeding females to keep the species alive.

Now regarded as critically-endangered, some bird experts fear they are headed for local extinction. Most ornithologists believe their disappearance is linked to mushrooming human population growth, which has displaced them from many of their natural habitats.

It’s also probable that the birds are collected for magic/medicinal purposes because of the traditional belief in their association with rain.

In 2013, local bird experts Alan Kemp and his daughter, Lucy, suggested, in a research paper, that its rapid decline in its traditional breeding grounds may be linked to the move away from cattle to game ranching.

The birds breed co-operatively as a group, with a dominant alpha male and alpha female, but although adults can survive to the age of 40 or 50, most family groups only manage to rear a chick into adulthood once every nine years, on average.

Ironically, while the move to ranching wildlife has benefited many animal species, they suggest cattle ranchers used to stock their land more heavily, with the result that the grass layer is now taller and denser on land stocked with wildlife.